The basic structure of an LED involves a small chip of semiconductor, encompassed by a protective capsule and a specific junction that allows electrical current, in the form of electrons to flow through it. The specialized junction allows electrons to flow in only one direction through the semiconductor, and depending on the composition of the semiconductor and the energy of the electron, a different type of photon is emitted. This allows us to produce LEDs that emit photons in varying wavelengths, corresponding to varying colors of light (red, green, blue etc.) and types of radiation (IR, UV).

What are LEDs typical lifespan?

One of the major economical benefits of LED is its extensive lifespan. Other light sources such as incandescent or fluorescent lights use filaments and components that can burn out over a short period of time. LEDs produce light through current flowing through a semiconductor, which then emits photons. There is little strain placed upon the components of an LED, preventing burnout for much longer than traditional lights. Traditional incandescent bulbs have a lifespan of approximately 1000 hours, while fluorescent bulbs provide a lifespan of about 8000- 20,000 hours. LEDs, by comparison, have significantly larger lifespans from 50,000-100,000 hours. Although LED lights often cost more to purchase initially, a well-designed LED lighting system can provide light production, longevity, and efficiency better than any traditional lighting system.

How is LED better than HPS in terms of heat output?

Another great benefit to LEDs is the minimal production of thermal energy. High-intensity discharge lights, which have been used for indoor agriculture for many years have high operational temperatures and produce significant amounts of heat. These lights wastefully convert a large amount of electricity into heat. This heat must then be removed from the growing space, incurring extra costs through equipment and electricity usage. Of course, some heat is necessary for growing plants, however, there are much more efficient ways to provide heat for a greenhouse than the wasted electricity from HID lights. LEDs, on the other hand, produce very little heat which allows the user to place LEDs much closer to the plants, even at high intensities, to maximize light absorption. Of course, some heat is produced by LED grow lights, but the heat is effectively dissipated through the use of heat sinks.

Why is LED-light more efficient?

One of the greatest benefits of LEDs in an agricultural setting is their ability to target a very specific spectrum of light. Plants can make use of only specific wavelengths of light, those contained within what is known as the PAR range (Photosynthetically Active Radiation). Incandescent and Fluorescent lights typically produce enough PAR for plants to grow, however, they are often heavy on the green and yellow spectra. HID lights produce a PAR efficiency of about 40%, while LEDs can maximize PAR efficiency, from 80-100%. LEDs are capable of adjusting the spectral output, allowing the wavelengths emitted to match optimally with the plant’s photoreceptors. Chlorophyll absorbs blue and red light most efficiently, while green and yellow are mostly ignored by the plant. By targeting the specific wavelengths, those which the plant prefers, energy is not wasted on producing unused light. In addition, different wavelengths of light have different metabolic effects on plants which can be specifically targeted using different LEDs. LEDs can allow us to get larger, more specific yields out of our plants than previously possible.

All of the factors listed above can contribute to the overall efficiency of LEDs. However, even the actual power draw of LEDs is much more efficient than traditional lights. A typical incandescent light can successfully convert less than 5% of inputted electrical energy into light. LEDs, by contrast, are capable of effectively converting greater than 50% of its electrical input into light. In general, LEDs can reduce energy consumption in an industrial greenhouse setting up to 70%, compared to traditional lighting systems. In fact, a recent study showed that a 14 watt LED could effectively replace a 150-watt HPS lamp in the flowering of bedding plants. This is a specific example of course but provides a glimpse at the efficiency of LED lights.

Using the 14 watts LED and 150-watt HPS comparison, Singh et al. performed a basic cost comparison of the two lights: based on an electricity rate of $.10/kWh and the following features of each light. Again, this is a specific example but still provides an accurate comparison of the economic value of LEDs. Another more detailed example can be found in the article as well if you’re interested. In general, the initial investment in an LED will be returned through the reduction in electricity costs.

So, what have we learned about the efficiency of LEDs? Well for starters, LED lights have almost 2-3x the lifespan of other life sources, up to 100,000 hours. They run much cooler than other lights, allowing you to grow in a smaller space and giving you more flexibility with various setups. LEDs are much more efficient at converting electricity into light than other sources. In the case of using LEDs for growing plants, LEDs produce anywhere between 80-100% PAR, reducing the production of any wasted light. The design of LEDs and the different factors contributing to their efficiency leads to a more economical purchase by using less electricity and not having to replace the light more often. LEDs have a great number of applications in everyday, commercial, industrial settings, and even in space travel. LEDs have a bright future (pun fully intended), and LED technology will only continue to improve in the coming years, making them even more powerful, efficient, and affordable. 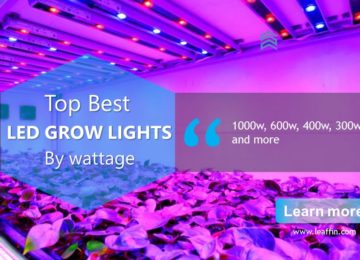 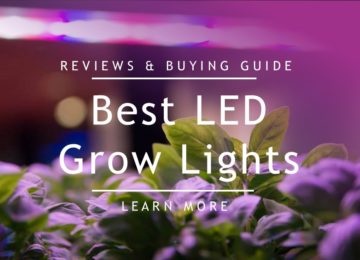 Growing Indoor Under LED Lights 2022: Top Picks for the Money 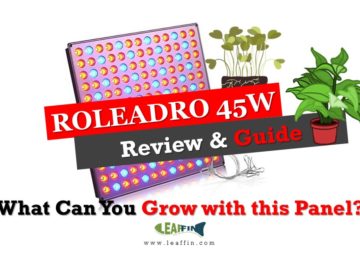