Rhubarb is definitely a versatile vegetable that proves to be quite valuable to a homesteader.  It is one of the top perennials I suggest to get started right away in a self-sufficient garden.

Once started, rhubarb will come back year after year, and is quite easy to take care of.  It can grow to be very large, and when treated well, will give you produce well into the summer in cool areas, and into the spring in milder areas.  Here, we can enjoy it fresh May through August, making it the longest-giving crop in our area.

The most common rhubarb varieties include:

Preparing The Soil Before You Plant Your Rhubarb

Rhubarb is a hardy perennial that grows best where freezing temperatures penetrate the ground, making it perfect for our zone 4 growing area.  It prefers full sun, but will tolerate some shade.

In areas where the summers are hot, rhubarb prefers to have full sun in the spring, and filtered shade in the summer.

Pick an area where the soil is well drained.  When preparing your plot, keep in mind that the deeper the soil is dug, the better.  Your hole should be at least 1 foot deep, and 3 feet wide.  If planting multiple rhubarb plants, make sure they will be spaced 4 feet apart.

How To Start Rhubarb From A Crown

Crowns should be placed with the root side down in your well worked soil, and covered to just over their heads (about one inch) with the remaining rich soil.

If you live in an area with wet winters, consider elevating your rhubarb by either planting in a container (see below), or on a hill.  Planting on a hill is simply done by preparing the soil as above, and then adding extra soil on top to place the crown in.  With the hill technique, it will be even more imperative to make sure your young rhubarb is getting enough water.

How To Start Rhubarb From Seed

Areas with mild winters, such as the deep south, do better growing rhubarb as an annual.  When done as such, it is much better to grow from seed.

Start indoors in late summer (August/September).  Soak in water for a couple of hours to enhance germination, and then move them over to small pots 2 per hole. When planting in a block of soil, plant 3 inches apart.

Once rhubarb have sprouted, move outdoors to light shade.  After 3-5 leaves have sprouted per plant, go ahead and move them over to their permanent home, and keep them evenly moist.  Protect these plants from any hard frosts, and rhubarb should be ready to harvest by spring, and done by April or May.

Remove annual rhubarb after the harvest has ended and compost the plant.  Pick a different site to plant next fall.

If growing rhubarb from seed with the intent to keep as a perennial, keep in mind if you have harvested your own rhubarb seeds that they will not grow “true.” They will likely not be the same variety as their parent.  If you simply love your rhubarb plant, it is better to wait and divide your crowns than it is to harvest it’s seeds and grow them.

Growing rhubarb from seed is only advised for annual planning, or in a container. Growing as a perennial means not harvesting for the first 2-3 years, as a harvest before then means a rhubarb will not come back the next year.

Growing Rhubarb In A Container

Rhubarb is a good candidate for growing in large containers.  Make sure your container is at least 2 feet wide and 2-3 feet deep.  Smaller containers are not advised.

Start with rich soil as rhubarb is a heavy feeder.  Try half compost and half well-rotted garden loam to start.  See above how to start by crown or by seed.

Taking Care Of Your Young Rhubarb Plants Their First Years

Rhubarb needs to be carefully weeded especially the first two years. Keeping weeds away before they begin with 2-3 inches of mulch once plants are 3-4 inches tall (especially in the winter) is much easier than trying to remove weeds without harming roots after they are present.

Keep rhubarb evenly moist.  If it is not raining on your garden, make sure rhubarb gets watered at least weekly.  Rhubarb in raised hills and in containers needs watered more often.  It is crucial in a young rhubarb’s life to pay special attention at any time the temperature is 80° or above.

In prolonged heat (such as in a zone 6 or above), rhubarb may go dormant and then resprout as temperatures begin to drop again.

If a flower stalk starts to develop, remove it.

Once established, it is nearly impossible to overfeed a rhubarb.  Keep in mind that although it loves water, it does not like to sit in water.

When To Harvest Rhubarb

Plants grown from seed should not be harvested for 2-3 years.  The exception is rhubarb grown as an annual.

Rhubarb grown from a root stalk can be moderately harvested after the first growing season, although it is best to wait until after the second growing season to begin.  Harvest for a few weeks, being careful to only take stalks as wide across as your thumb and then stop for the season.  Never harvest more than 1/3 of a plant.  After the third year, harvest all season.

To harvest, grasp at the base and gently twist while pulling up.  Always remove the leaves as they contain oxalic acid and should not be consumed.  Use the leaves to make homemade insecticides or compost them.

When not continually harvesting rhubarb, it will become tough and unpalatable. Remove large stalks and compost them.  Water the plant well, and if enough cool weather follows, you may be able to harvest it again in a few weeks.

When & for how long can I harvest rhubarb?

As with all perennial edibles, it is best to wait a few years before harvesting rhubarb to allow the plant to fully establish a strong root base, says Ellen Ecker Ogden, author of The Complete Kitchen Garden (Stewart, Tabori & Chang, 2011). Once the plant is vigorously producing, which may be up to 3 or 4 years depending on the size of the original plant, rhubarb is ready to harvest. Start harvesting when the leaves expand in the spring, picking stems that are at least 1 inch thick by gently tugging and twisting at the base of individual stalks to free them from the crown. Or use a sharp knife to cut off stems, taking care to avoid injuring buds just below the soil surface. Toss the inedible leaves, which are toxic to humans but pose no hazards to soil organisms or other plants, into the compost pile, or lay them on top of the soil as a light mulch in the vegetable garden.

Leave a half-dozen healthy stalks on the plant during the growing season to continue to nourish the plant roots. Rhubarb is most productive in the early spring, yet will continue to produce stalks and foliage for most of the summer if conditions are right. To keep the plant’s energy going into leaf production, remove seed stalks as soon as they appear. Don’t be surprised when the whole plant naturally dies back at the end of the season, disappearing until the following spring, Ogden adds.

If aphids are found on your rhubarb, spray with a strong spray of water to knock them off if possible, or use a spray bottle of diluted Dawn soap.  Remember that aphids will transmit red leaf (rot) as they eat.  For this reason, even if the stalks where they were found look fine, it is best to remove those stalks and discard them (not in your compost pile).

Not ready to grow your own rhubarb or don’t have enough room?  It is possible in some areas to forage for this vegetable.  However, these areas also grow lookalikes that can be toxic.  Take extra caution when foraging in your area. 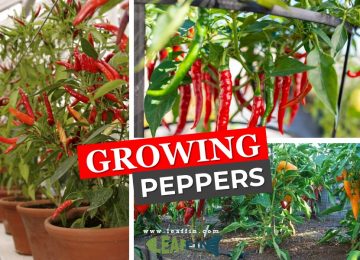 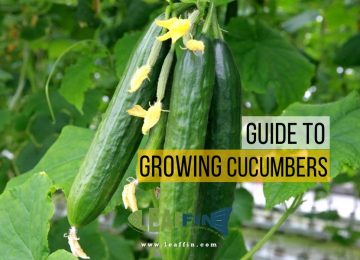 How To Grow Cucumbers: The Warm Weather Vegetable

How to Start Carrots in Sand