I love pineapple!  Not only the taste but it brings back fond memories learning how to propagate pineapple as a child.  I couldn’t wait until my mom would bring home a fresh pineapple just so I could pot it up and watch it grow into a houseplant that would eventually produce a new pineapple! A great project for children

First, choose a fresh pineapple from the grocery store that has nice green foliage that you think may look nice in a container. When you are cutting the fruit to eat, remove the top about 1/2″ below the foliage. Remove a few of the bottom leaves and then cut off the outer part of the pineapple, leaving the center part that is tough and stringy.  You can also grab the foliage and twist it off, but this requires use of gloves and can cause damage to the foliage.  Allow the top to dry or callous for several days. This helps prevent rotting when it’s placed in damp soil.  When the cut part is dry, put the pineapple top into perlite, vermiculite, or coarse sand up to the base of its leaves. (I have had success in just water as well, but also have had more rotting that way). Water your chosen rooting medium. Place in bright, indirect light. Check it often keeping it moist, but not wet.

In about 5 to 8 weeks, you will notice small water roots forming.  When a nice root system has grown, plant pineapple moderately fertile, well drained potting mix and replace it into the bright indirect light for another 2 to 3 weeks until it’s establish at which time it can be grown in full sun.  Water regularly to keep soil moist and fertilize twice a month during spring and summer. In fall, reduce fertilizer to once a month through winter. If the plant has been placed outside (never do this until all danger of frost has passed), it must be brought back indoors before first frost.

A plant takes about 2 to 3 years to be fully mature.  To encourage flowering, place a mature pineapple plant in a plastic bag with an apple for 3 or 4 days.  As the apple ripens it produces ethylene gas.  This gas stimulates the pineapple and encourages it to bloom.  With a little luck your pineapple should flower 2 to 3 months later. When grown outdoors, they bloom between December and January, set fruit a few weeks later and have edible fruit to pick by July.

Pineapples require patience, but the reward is immense. 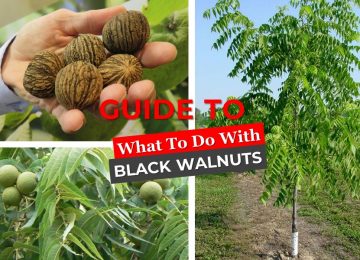 What to Do with Black Walnuts? (Harvesting, Cracking & Storing)